On November 20, 2021 (Saturday), after a year and eight months, we managed to hold Jin Katagiri’s solo exhibition, ” NENDO-MICHI 20th Anniversary Katagiri Jin’s SOSAKU DAI-HYAKKA,” which was scheduled to be held in the spring but had to be cancelled due to the effects of the corona epidemic.

This exhibition, which Katagiri himself has said is like a retrospective exhibition even though he has not passed away, is filled with his life in art, from a video of him talking about how he became interested in art, to paintings from his junior high school days, to works from his prep school days.

I’ve been working with him since 2010, when I designed a Jomon T-shirt (jomo-T), and since 2012, when we held the “JINDIANA JONES: Treasures of Tears” exhibition at the AEON Mall in Japan, and also produced his solo exhibition “Giri exhibition” in Taiwan.
I would like to write a retrospective article on the history of my production.
Actually, I was wondering if I would ever be able to hold this exhibition anymore, so I am very relieved and happy that I could.

The highlight of this year’s event, a large clay piece called “Park Enma”!

This exhibition, what I want you to pay attention to, is the biggest work ever, “Park Enma!
Katagiri has been saying for a long time, “When I touch clay, I feel like I’m regaining my childhood senses, or maybe it’s just the texture that feels good, so even when I do workshops for children, it’s usually the adults who get absorbed in the end.”

He has been making these clay works every month for 22 years without a break. (There were some months when he skipped a month, but sometimes he made it twice a month, so if you put it all together, you could say he made at least one piece every month!) The reason why he was able to continue making them was because “it was fun to make them.” He also said so.
It’s fun to make things! That’s what we want to share with you! That’s the concept behind this exhibition.

” Then, let’s make the main work together, with the participation of the visitors this time!” we thought. We had planned to invite people to participate and create the main work together.
However, the exhibition was cancelled due to the covid-19 pandemic…
After a year and eight months, the decision was made to hold the event, but the threat of covid-19 was still continuing, and the dream of gathering together to make it did not come true….
However, we wanted to make a big piece of art to show everyone how much fun we had, so we decided to do a crowdfunding campaign, make it somewhere else, and exhibit it.

In the upcoming days, we would like to distribute videos of the work in progress.
His sons, Taro and Haruta, and even the mayor of Miyashiro, his hometown, participated in the making of the work.
We, the staff, were also able to help out and experience the joy of creating as he said.
It feels so good to touch the clay! And it’s so much fun to make!

For this large scale piece, he created a piece based on an octopus from his hometown, the Octopus Park. People of the Showa generation saw it everywhere, didn’t they? “Octopus Park”.
The ” Park Enma” is a large piece of work, and the slide that extends from the inside of the mouth is a tongue, which you can ride on to take pictures. (The tongue is made of resin so that everyone can sit on it. In addition, Mr. Tsuchiya, a tile craftsman, came to help us while we were maki

And there is actually something to see on the back side! Various faces created by those who participated in the creation of the work and those who are friends with him adorn the back.

Recreate the Katagiri House as seen on the official YouTube “Giri Channel”!

The first thing to be unveiled at this exhibition is a reproduction of the Katagiri house.
We have recreated the Katagiri house, which you can see on our official YouTube channel.
There is also a DS storage case made by his son Taro, a cardboard tank made by Haruta with him, and a sweater knitted by his wife Yuki. The quality and creativity of everyone was amazing!
The “joy of making” that he feels and practices is also practiced by everyone in his family.
They are a wonderful family.

Not to be outdone by his work, he has been writing a series of articles for TV Bros.
In the series “Tell me, because I want to know. For short, ” O Shi・Ri”. In the series, he has always included illustrations that he drew himself. In this exhibition, we display his original drawings, items he made during the interviews, and photos of the interviews.
We miss the days of long, mopey hair.
When he had to cut his hair for a stage role, we also did a hair-cutting ceremony.
The nostalgic photos are a must-see.

I have introduced many of his exhibitions, but by far the most interesting of his works are his clay works.
As he has said many times, “I want you to see my sculptures in person.” When you see them in person, you can feel the detail, the volume, and what he is thinking about.

This is a work from his early days, when he was full of “self-expression” using his own face as a motif.
At that time, he was not as busy as he is now, and he was very elaborate in his detailing, but he did not have the same technique as now. As it turns out, he’s gotten better and better over the years.
This time, the clay of the “I-han-tape stand” had deteriorated and his hands were broken, but he repaired them in time for the exhibition, but the colors were not the same, and that was another interesting thing to see.

After that, there is some kind of creepy style that follows. It’s interesting to see how Katagiri felt at the time, what he thought was interesting, and what was going on in his head at the time.

In comparison, his recent style is a bit cute. The cute ones are really good, but I love the style of the weird era.

Since last year, “THAT IS GOOD” has been asking him to make a piece of clay every month and present it to us. The project is called ” Katagiri Jin os NIPPON local the soul of clay “, and we take the liberty of creating a clay work with the motif of a specialty of each prefecture in Japan.

Here is a group of those works.

This is a local work that he started to make for the “Giri Exhibition” that travels to AEON malls all over Japan. At the Giri Exhibition, we couldn’t go so far as to create a piece for every prefecture in Japan. This series will continue until we have completed all 47 prefectures! So, when will the 47 prefectures come together?
I hope to have another solo exhibition when we get there.

Katagiri’s love of Jomon led him to create his first local work.
The Jomon trilogy was created in a tie-up with Aomori Prefecture.
In 2021, the Jomon sites in Hokkaido and the northern Tohoku region will become a World Heritage Site!
In commemoration of this, I’ve created a corner with a collection of Jomon related works.

Let’s all experience the joy of making things! (Workshop)

This is the workshop area where you can experience the fun of making. PADICO’s clay workshop is very popular because people seem to want to knead clay when they see clay works. The clay used is called Hearty, which was provided to us when we made the “Park Enma”. It is colorful, light, and easy for children to use. This time, we will have a workshop to put the clay on wind chimes. (The season is a little off, but we were originally planning to hold this workshop in spring…) Thank you very much for your cooperation, PADICO.

There is one more workshop that conveys the joy of making.
This is a paper craft of a sun visor in the shape of a shade-shaped clay figure, which he produced and designed. You can make your own original sun visor by cutting it out, attaching it, and decorating it with a stamp. I imagined the kids strutting around Tokyo Dome City wearing these sun visors. Yes, just like the Pikachu sun visor from Pokemon!
It’s fun too, so give it a try.

As Mr. Katagiri said, it’s fun to see the actual sculptures. It’s hard to convey the sense of weight and detail in a photo, isn’t it?
When you see them at the exhibition, you can find hidden characters like this.
I hope you will come and see them in person.

Lastly, by the way, I’m not very good at it either, but I made it at home, secretly, by myself.
There is no one or anything. The name of the work is “Girl.” 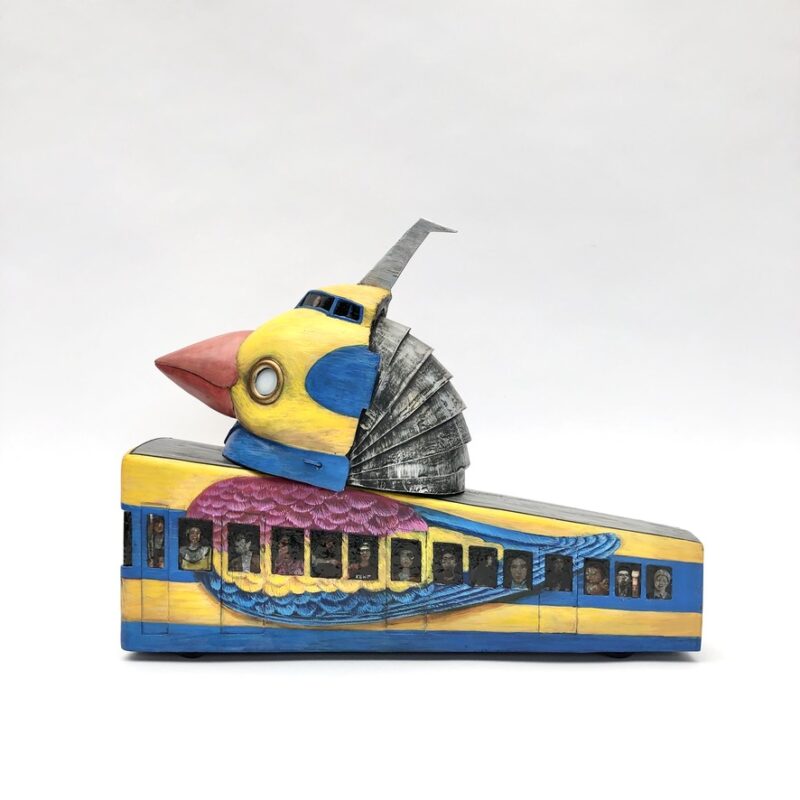 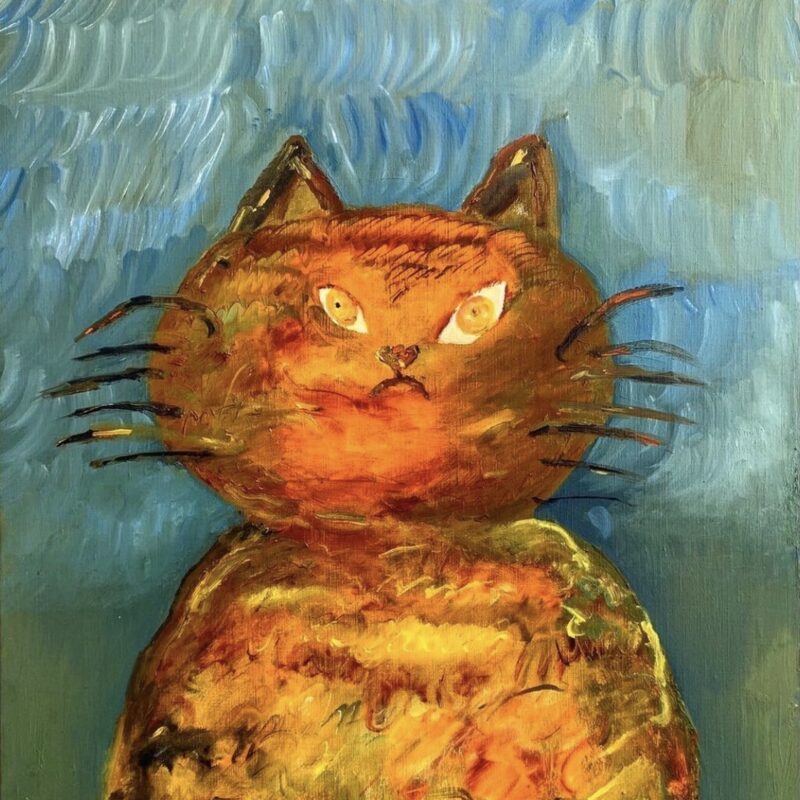 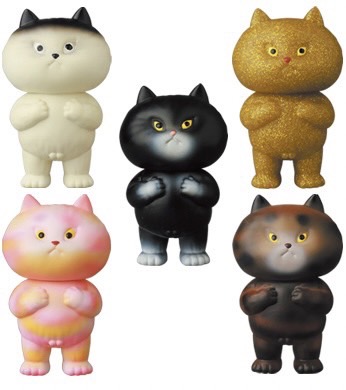 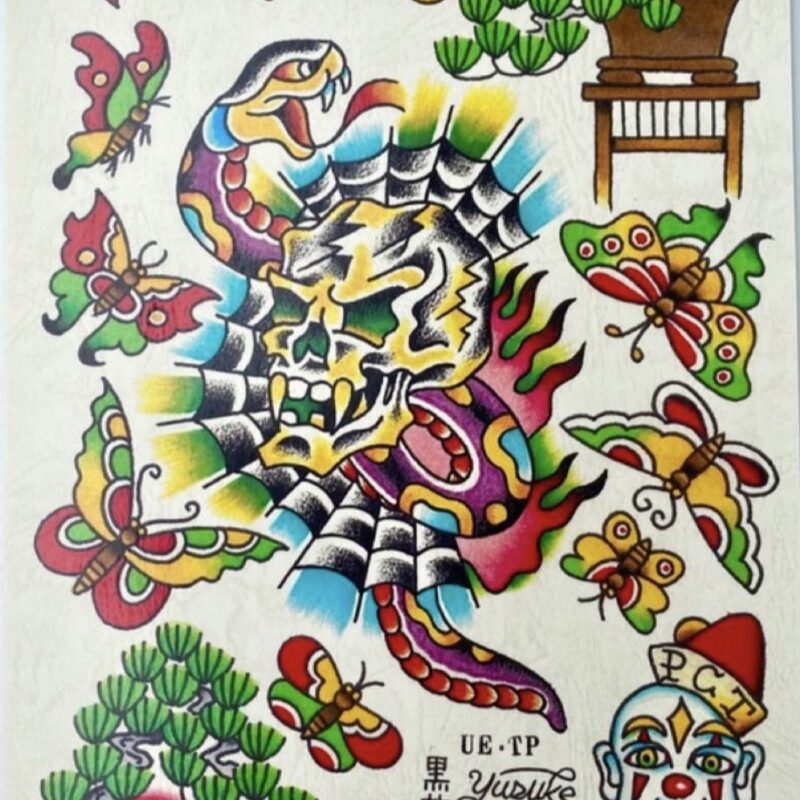