Past and Future of Nippon Subculture ~No.1 Post Digital Art~

I’m Taketo Kobayashi, a post-digital artist. Since this is my first post, I’d like to start by introducing myself. I started using CG (computer graphics) software when I was in college, and after working at Tokyo University of Technology Creative Lab and animation company GONZO, I became a freelance CG designer. After various backgrounds, I now live in Singapore and run a company that produces CG / VR. After the Great East Kanto Tohoku Earthquake that occurred in 2011, I decided to utilize my CG skills to create artworks. I am not aiming for grandiose thoughts like “changing this world with my art”, but through my art and the process of creating my own art, I want to contribute to society and the community to make it a bit better. I also hope that more people in this world will know about Japanese culture, from Jomon to modern subculture, redefined with my perspective. It is not only for foreign people but also for Japanese that I’m presenting my artworks hoping it will be a chance for Japanese people to reaffirm their own culture.
Any potent nation or empire born in could not avoid going into time of decay after its maturity. Japan, which used to one of the world’s top economic powers, is now facing a time of population decline and, to put it exaggeratedly, is in danger of collapsing the country. I think this time of crisis could be the chance to change our mind-set from modern way of thinking emphasizing too much on economics to a more mature, deliberate, culture engaged nation. In this column, I would like to share little by little the Japanese culture seen from overseas, my work, and the ideas that underlie it.

First of all, I will start with the “post-digital artist” that I’m using as my job title. The term post-digital (art) may still be unfamiliar in general. When I visited Sydney, Australia in 2017, I happened to see an exhibition called “out of hand -materializing the digital” at the MAAS (Museum of Applied Arts and Sciences). There were no people in the exhibition just before closing on weekdays, and I was able to enjoy the works of artists / designers that I had only seen in photographs on the web.
Iris van Herpen (Iris van Herpen), who continues to fuse fashion and technology by making full use of digital devices such as 3D printing and laser cutters. Richard Dupont (Richard Dupont), who transforms the 3D scanned his whole naked body, with 3D software to create a self-portrait with a wavy shape, Kijin Park is a conceptual work in which 3D-printed cups and the 3D data of the cups that are used for 3D printing in binary notation printed on a considerable amount of paper bundles are displayed side by side. (Kijin Park | Visual artist Kijin Park | 대한민국), etc. It was such a member. According to the catalog, the “out of hand” exhibition is a new curation of what was held at the Museum of Arts and Design in New York in 2013. 2013 is the year when I first produced and exhibited my 3D printed artwork, so I got the impression that the concept of “post-digital” is far ahead of the rest of the world.

So what is “post-digital”? There are many different interpretation about this term, but my definition is

◯ Of course, It uses digital tools. There are various methods such as 3D printing, CNC, laser cutter, digital knitting, etc.
And …
◯ Understand the characteristics of digital tools / technologies and reflect them in the resulting work / shape. A good example is MIT professor Neri Oxman who developed a 3D printing method called voxcel print using a Stratasys printer and created a work that could only be made with that method. (Researchers Develop Multimaterial Voxel-3D Printing Method) Artists using digital tools which even the company had produced those digital tools never expected, is one of my definitions.

And the other is a very subjective story

◯ The artist has a physical connection to the virtual (lack of physicality) thing called a digital tool.

Essentially, art meant technology. It is a technology that brings into visible form the invisible: the flow of energy, human connection, love and peace, and many other concepts.
In traditional art, painting, ceramics, and sculpture, interaction with materials has been essential. For example, when making pottery, there is a material called “clay,” and the balance of its strength, viscosity, and gravity determines the frame of the form. It was an animistic way of thinking, where the “soul” of the work was infused through the physical act of interacting with the material of clay through the hands and fingertips. In contrast, “digital art” is characterized by a lack of physicality. My process of creating three-dimensional objects using 3DCG software is completely virtual. By creating works in a virtual space, I am able to create forms that are free from the limitations of gravity and materials that conventional art must face. Of course, when I materialize your work using a 3D printer, it will be subject to the limitations of gravity, but it will not be trapped by gravity in the production stage. The only way to present this unlimited space of creation as a work of art was through video, images, or 2D methods. However, thanks to 3D printing and other digital devices = new art tools, post-digital artists have become border-crossers, freely moving between analog and digital. I believe that post-digital is the sense that digital tools without physicality can have a sense of “soul” or animism, and that machines can be inhabited by “ghosts” in its shell. 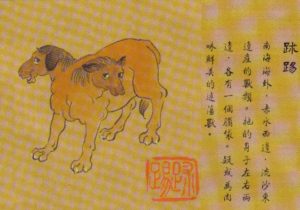